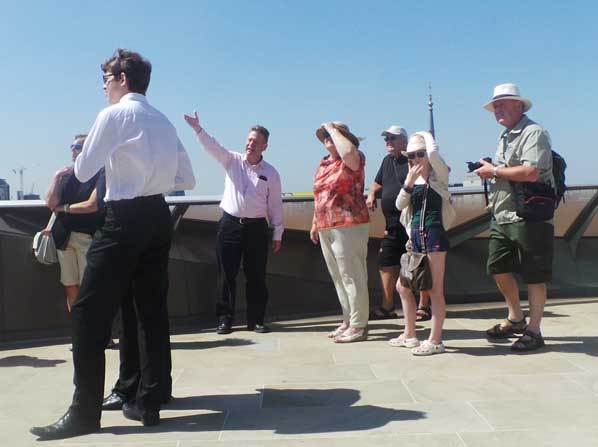 If it's your first visit to London then be sure to let Richard know at the time of booking in order that he can tailor a tour to ensure you get a good feel for and appreciation of the City.

He can also make suggestions about other things you might wish to do to maximise your enjoyment on your first trip to London.

A great start to your time here is Richard's London Discovery Highlights Tour as it provides a fantastic insight into London's layout, history and contemporary scene

By the end of your day you'll have a pretty good idea of where everything is situated, where the major attractions are located in relation to each other, and you'll also be able to earmark which locations you might wish to return to at a later date, either with your own private guide, or under your own steam.

You might also like to plan an evening tour so that you can see London by night, when many of the major attractions are floodlit and look absolutely stunning.

You could book a London pub tour that would take you to three or four of the City's most historic and atmospheric inns and taverns where you will have the opportunity to observe Londoners in their natural social habitat, the pub!

If you're feeling particularly brave, then you could delve into the sinister East End alleyways where the Jack the Ripper murders occurred in 1888, or, if the idea of following in the footsteps of a bloodthirsty 19th century serial killer doesn't appeal, you can undertake your own ghost hunt on a tour of haunted London.

Obviously, if it is your first visit you'll want to visit London's major attractions such as the Tower of London, Westminster Abbey and St Paul's Cathedral. No problem. Richard can either incorporate these into your London Discovery Highlights Tour, or you can book a separate tour that concentrates on all three and which even combines them with a visit to the Change of the Guard, providing it is taking place on your chosen day.

Booking your own private guide to take you to these major attractions has many advantages, not least of which is the fact that Richard can bypass the lines and get you in via the private entrances that only those accompanied by licensed guides are permitted to use. Because of this major advantage, you'll maximise your time spent enjoying the attractions and minimise the time wasted waiting in line for admission.

DO THE TOUR AS YOU WISH

The tour can be done in several ways.

If you would prefer to do it using your own chauffeur driven car then Richard can meet you at your hotel and direct the driver.

If you don't have your own car but would like one, Richard will happily advise on a reliable company at the time of booking.

Alternatively, there is Richard's preferred method of getting around, which is on foot and by public transport. He prefers this because it is often the quickest way of getting around and involves the least hassle. There's no getting stuck in traffic jams and no wasting time trying to find a place to park. You get to spend 100% of your time doing what you have booked Richard to help you do, seeing and exploring London.

Don't forget that, because you have booked your own private London guide, the whole tour is done at your pace with you calling the shots.

Richard can guide your tour using any mode of transport that you feel comfortable with.

For area specific tours, such as the Inns of Court or Hampstead, the tour will be on foot at a gentle and enjoyable pace.

For full day tours we will make use of the bus and underground system to get around and so, if you don't have your own transport, you'll need a valid ticket, Travelcard or Oyster Card.

You can find full details of the various means of travel by visiting this page.