Imagine yourself, exploring a hidden City that lies, tucked away, between and behind modern towers of soaring glass and concrete.

Picture yourself, discovering Roman remnants, narrow alleyways and hidden courtyards that nestle in quiet seclusion amidst picturesque back streets that are, seemingly, untouched by time and which are centuries removed from the rush and noise of the modern City.

For that City, the Secret City, is just waiting for you discover it and, on this tour, you will delve into those places, those alleyways, those courtyards and those ancient thoroughfares where history was made, and where time, well and truly, stands frozen in a bygone age.

Richard's tour around Secret London begins at the very heart of the historic City in a warren of old lanes that still follow their medieval street patterns. 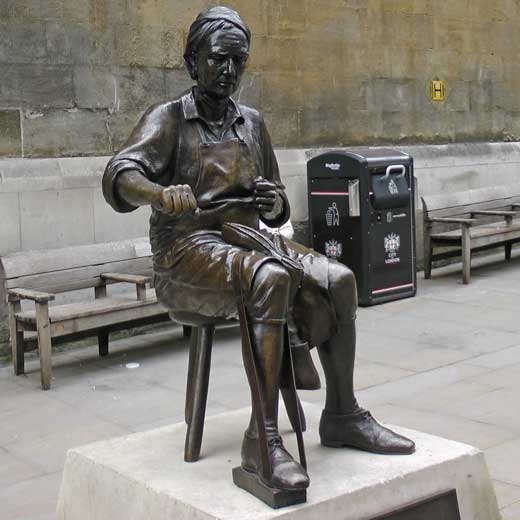 It then picks its way through 2,000 years of captivating history, uncovering some of the City's most fascinating locations and providing you with an unrivalled opportunity to get up close and personal with London's eventful past as a veritable cavalcade of history unfolds before your very eyes and every corner turned throws up a new and fascinating surprise.

You will have the opportunity to say hello to the local cordwainer, before making your way to the exact centre of the City of London at a site on which successive Lord Mayors resided until 1752.

FACE TO FACE WITH WINSTON CHURCHILL

We then make our way to a modern building which, when it was opened, caused the traditionalists to throw their arms up in horror and hold a funeral service for the passing of British architecture outside its front door! 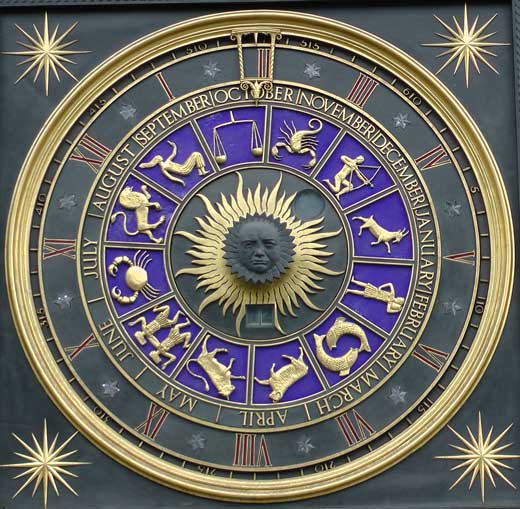 But this building holds a major surprise for us for, staring down at us from above its front door, is the well disguised face of Winston Churchill.

Why is he here?

Well, it's a fascinating story and you'll hear it in all its hilarious glory as you gaze up at the face of the great war time Prime Minister frozen forever - or at least for as long as this building remains - at the centre of a sun burst. whilst astrological figures shuffle around him.

A LOOK AT ST PAUL'S CATHEDRAL

Across the road is St Paul's Cathedral, so over we go, and Richard will point out some of the most exquisite features that adorn its exterior walls. 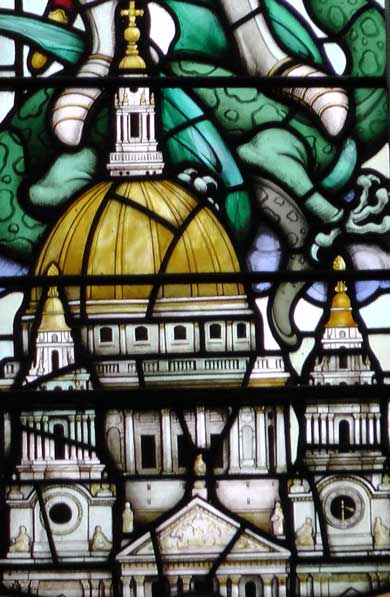 Features such as the carved Latin inscription that its architect, Sir Christopher Wren, thought perfectly summed up his emerging masterpiece as it rose from the ashes of its predecessor, which had been destroyed by the Great Fire of London in 1666.

Features such as the depiction of the conversion of Saul on the road to Damascus, carved by a man who had never actually been to Damascus and who, therefore, modelled its buildings on the ones he knew in London!

Features such as the cherubic faces, the faces of which are contorted into all manner of bizarre expressions.

Indeed, by the time you've circumnavigated the exterior of St Paul's Cathedral you'll have gained a terrific understanding of just what a special and exquisite building it is.

From here we make our way to one of London's best kept secrets - a rooftop terrace from which we can look across at the dome of St Paul's opposite whilst, at the same time, enjoying an absolutely stunning view across the London skyline that stretches before us in all directions. 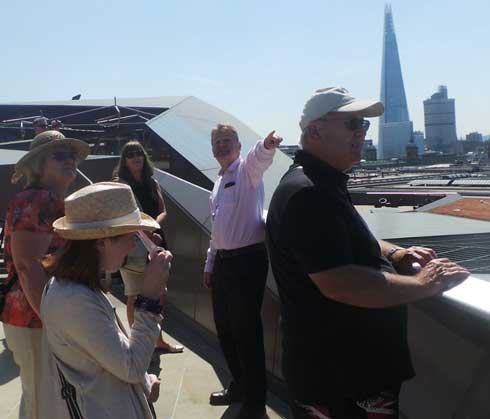 Up there on our lofty perch, with the City streets far below, Richard will take you on a visual tour of the many sights that can be seen from this City high point.

The London Eye and Big Ben, the statue of justice atop the nearby Old Bailey, the golden dragon that surmounts the spire of a church we will see later, the shard, Battersea Power Station, Crystal Palace - the list just goes on and on.

Suffice it to say, this is very much a highlight of the tour, in every sense of the word, and virtually everyone that Richard introduces it to is taken aback by the vista that meets their eyes when they first arrive here.

Descending back to terra firma we're off on a roller coaster of a ride through lanes, thoroughfares and alleyways where the history of London is, quite literally, written in and on the streets. Bread Street, Wood Street, Milk Street all remember the commodities that were sold in them in the Middle Ages, as does Love Lane, albeit your guide will be somewhat discreet about what commodity was sold in this latter location in the Middle Ages!

These streets deliver us to the glorious facade of London's medieval palace, which was built between 1411 and 1440, and which, if it is open on the day of your tour, we'll even go inside.

Next up, is one of the best preserved stretches of London's Roman wall, 2,000 years old and crackling with history and atmosphere.

Close by we uncover some of the last surviving Blitz damage left in London, the fire scarred walls of which bear vivid testimony to Hitler's avowed intent to wipe out the historic heart of the City of London.

THE MEMORIAL TO HEROIC SELF SACRIFICE

The tranquil surroundings of a beautiful park come next where we encounter a truly poignant, and fascinating, memorial to Heroic self-sacrifice. 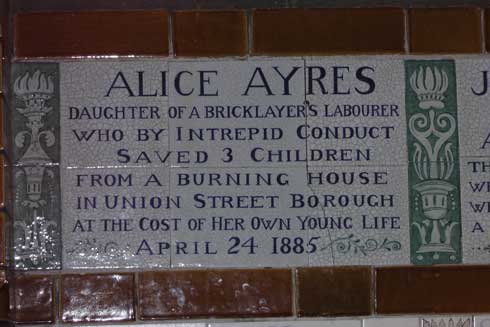 Here, preserved on glazed tiles, you will read of long ago moments when ordinary men, women and children, performed acts of astonishing bravery, and gave up their own lives to save the lives of others.

It is a genuinely moving spot and we will pause to give you time to read and photograph the poignant inscriptions as Richard tells you the inspiring stories of some of those remembered here.

A TRANQUIL THROWBACK TO BYGONE LONDON

Stepping through the timeworn gate of England's oldest hospital, we then find ourselves surrounded by 18th century buildings that harbour a delightful courtyard in which the noise of the modern city is reduced to a distant murmur.

Here you will venture inside a 15th century building that is part of the old monastic foundation that originally stood on this site. 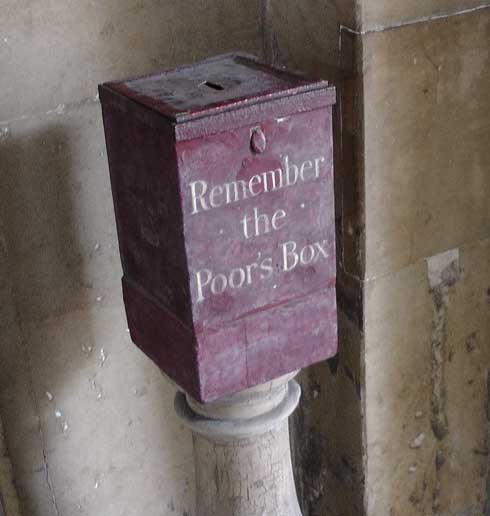 Once inside, you'll see a memorial floor brass, that dates from 1439, and a wall plaque that remembers the Sergeant Surgeon to Queen Elizabeth 1st, the inscription on which will, most certainly, raise a smile!

You'll even see the charity box that, in days of yore, was used to encouraged those who had to contribute to the welfare of those who had not and which still solicits all who pass it to "Remember The Poor."

WHERE SHERLOCK FELL TO EARTH

If you are a fan of Benedict Cumberbatch's Sherlock, you'll enjoy our next building, for it was here that Holmes and Watson met in Conan Doyle's stories. 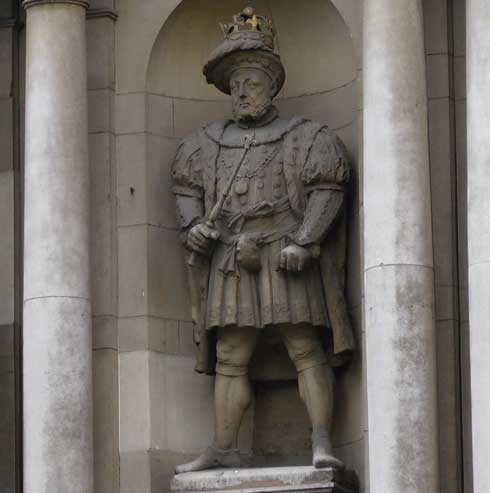 Passing beneath the only outdoor statue to Henry V111 in a public place in London - and he does look impressively regal - and pausing to gaze up at the curious monument that marks the spot where the Great Fire of London burnt itself out in 1666, we head for the ancient execution ground where William Wallace - Braveheart himself - was put to death in August 1305.

Having paid suitable homage to this noblest of Scottish patriots, we continue our adventure by ducking beneath a 16th century gatehouse to be confronted by the soaring majesty of London's oldest parish church, a glorious pile of ancient stone that transports us back to the year 1123.

In it's churchyard is a grave around which one of the City's most bizarre ceremonies take place when, once a year, forty poor widows are supposed to.... let's not spoil the surprise!

WE END ON A HIGH

Directly opposite is the oldest house in the City of London, which dates from around 1602 Richard will point out some truly unusual aspects of the ancient fabric of the building, 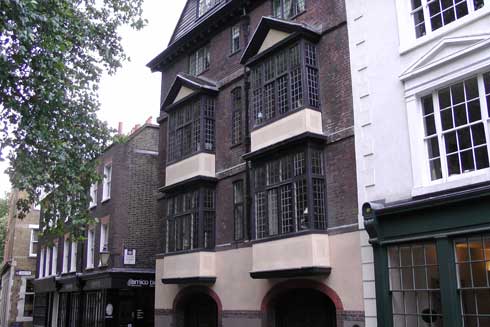 These range from the names of Winston Churchill, the late Queen Mother, and various other illustrious 20th Century figures that are etched onto the glass panes of the windows, to architectural features that make this one of London's most intriguing and curious buildings.

Practically next door to this true secret landmark you will find a lovely old 18th century pub.

Here, if you wish, you can stop off and rest your feet whilst enjoying a pint of beer, or a cup of tea or coffee, as you think back on the last few hours spent twisting and turning our way through the ups and downs of the City's past on a voyage of discovery in the course of which you will have encountered and experienced 2,000 years of Secret London.

There's also an old Victorian photograph on the wall inside that shows the forty poor widows taking part in the aforementioned ceremony in the churchyard opposite and you will be able to see them actually.... no, we're still not going to spoil the surprise!

There is a lovely old pub next to where we finish called the Rising Sun.

We probably cover a distance of around 2.5 miles on the Secret London tour.

There are also a number of pubs and coffee shops on the route where we can pause for a libation should the urge take you.